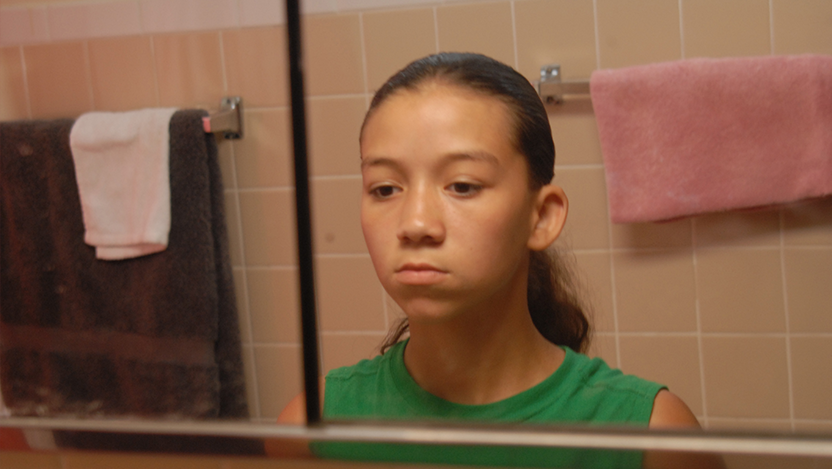 Six short films about transgender & gender non-conforming young adults appear in this collection designed for use in high schools and LGBTQ+ centers, complete with curriculum and action guide.

"Jeez Eddie! Quit being such a girl. C'mon we got a kickball game going on by Danny's place!" A narrative short, Eddie tells the story of a young Latina girl who's just one of the boys and a VIP in the neighborhood kickball game. But on this particular afternoon, Eddie confronts her sexual and gender identities when an embarrassing moment forces her to step up to the plate.

From climbing trees to shooting hoops, Donna Carter's childhood and adolescence was all about smashing stereotypes and glass ceilings. In this experimental short, she explores how following her own dreams and instincts allowed her to become a college basketball star, sports writer, and the publisher of the first-ever women-in-sports magazine. Drawing on personal narrative, still photography, and stop animation, Tomboy is an imaginative autobiographical account of an African American tomboy's journey to success and self-acceptance.

"How could you raise a transsexual child and not know it?" In this honest and compassionate documentary, the father of a transsexual child shares his family's story - what it was like when his child came out, how their relationship has changed and how their bond continues to strengthen. Made by a father for transgender individuals and their parents, The Bond offers hopeful answers to the hard questions parents face when a child - of any age - comes out.

Kade is a sixteen-year-old FTM (female-to-male) transgender youth residing in Tucson, Arizona. Though Kade's parents are supportive and nurturing, it hasn't always been easy. As Kade entered puberty, he became depressed and frustrated with his changing female body and even considered suicide. Realizing that Kade's identity was more complex than being a tomboy or lesbian, he and his family sought support from their local LGBTQ+ community center and searched for resources on the internet. This award-winning documentary follows Kade through two years of his transition process, highlighting important milestones including his name change, his first shots of testosterone, and his first girlfriend. Throughout the film, Kade's friends and family candidly express their feelings about the transition, the changes they see in him, and how their own lives have been transformed along with his.

An animated musical, Bikini stars a young boy, dolled up in his mother's yellow swimsuit, who is afraid to come out of the locker room. With the encouragement of a pair of happy twins he emerges, but their lady friend would rather receive all the attention herself. Set to the classic 1960 song "Itsy Bitsy Teenie Weenie Yellow Polka Dot Bikini," this short offers an entertaining take on finding the courage and acceptance to express one's gender with honesty and style.

Two-Spirit People explores the berdache or "two-spirit" tradition in many Native American cultures, in which individuals who embody feminine and masculine qualities are understood as a third gender, beyond man and woman. In many communities, two-spirit people act as a conduit between the physical and spiritual world and because of these unique abilities, are often placed in positions of power within the community. Told through powerful personal testimony, archival photos, and clips from Hollywood Westerns, this ground-breaking documentary - one of the first cultural works to revive the term "two-spirit" - offers a unique overview of historical and contemporary Native American concepts of gender, sexuality, and sexual orientation.